From his great-great-great-grandfather, the first surfer photographed on the beaches of Waikiki in the 1890s, to his late father Ben Aipa's legacy, surfing is in Duke Aipa’s blood. His father was known for his innovative surfboard designs and shaping—and was an influential surfer who impacted a new generation of surfers.

Outrigger's Surfer in Residence series caught up with Duke to talk about his father, the significance of paddle-outs in surf culture, and his father's impact on his life.

"The Duke [Kahanmoku] was my dad's idol growing up; he wanted to be just like him. My dad would say... it's my honor,” said Duke. "The legacy of aloha is the foundation that my dad built his life upon, one board at a time.

Ben passed away in January of 2021, and to celebrate his life and legacy a paddle-out memorial was held this August on what would have been his 79th birthday. Family, friends, loved ones, and dozens of surfers that he influenced participated in the paddle-out. Dating back to the 1920s, this paddle-out tradition is a tribute held in the ocean, paying respects to the life and legacy of the people who have passed away.

“The person that has passed is released into the ocean, and everybody explodes in cheering and praising the name of the person. You can feel the love, you can feel the mana,” said Duke. “It takes all the pain and the sadness and heals you both emotionally and spiritually.”

As everyone celebrated and honored Ben during the paddle-out, Duke found the moment perfectly fitting for this late father. 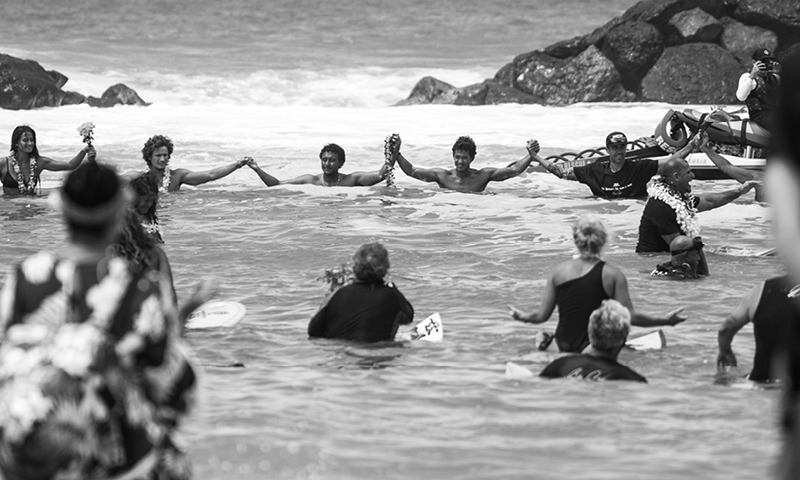 The Future of Surfing through Art

To learn more about the future (and past) of Oahu's surf scene, visit the "Love & Aloha: Surfing in Waikiki.” The exhibit at Outrigger’s Waikiki Beach Resort showcases the “past, present, and future” of Hawaii's surfing culture with pieces from some of the island's most important artists. See and hear stories of Hawaiian surf legends and the evolution of the sport the iconic surfing neighborhood of Waikiki—including a live surf camera to scope out the waves in real-time.

And you can not only check out the surf-art scene but also stay and play with special offers available at Outrigger Waikiki Beach Resort—and if you have your own board, catch a wave and join in on a surf session with the pros.